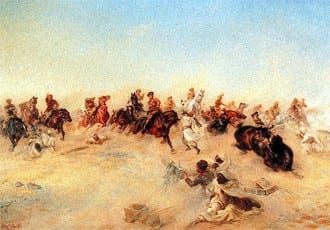 Sponsorship of 100th anniversary of Agagia

Proud to sponsor the commemoration to mark 100 years since the Battle of Agagia took place.

Agagia, the name for the famous charge of the Queen’s Own Dorset Yeomanry against a mixed Turkish and Senussi force in the Egyptian Western Desert in 1916, was the last Regimental charge in battle by the British army which routed the enemy and was a key element in preventing the Turks and their German allies from capturing the Suez canal, a vital link with India.

Members of the Dorset Yeomanry will start the commemorations at the Dorset County Museum and then go onto the Keep Military Museum to see an original armoured car from the 1916 battle.

A display of military collectables will be staged at The Keep Military Museum as well as an original painting by 19th to early 20th century military artist Lady Elizabeth Butler, a Dorset resident who was commissioned to paint the battle.

Tickets to see the displays are £1.50 per person. For more information, visit www.dorsetcountymuseum.org/events?item=648